New Philadelphia was the first town in the United States of America to be platted and legally registered by an African American, Frank McWorter, in the year 1836. Free Frank was born a slave but mined saltpeter during the War of 1812 and earned enough money to buy his freedom – but not before buying his pregnant wife so their child could be born free. As a free man, Frank petitioned to take on the last name of McWorter, a slightly altered version of his owner’s name, so he could better protect his property.

He gained some land in Hadley Township and began selling lots to gain more money so he could continue buying the freedom of his family members. By the time of his death in 1854, Free Frank had freed 16 family members, sold/built on 144 lots which became [New] Philadelphia and helped countless slaves and freed slaves find their way to freedom. The town continued for many years after Frank’s death but the population slowly decreased toward the end of the century and was nearly all gone by the 1940s. Today, only artifacts and memories remain of the original town.

The New Philadelphia Association is working to gain recognition for the site and its history. The townsite and Free Frank’s grave are listed on the National Register of Historic Places, the townsite of New Philadelphia has been named a National Historic Landmark and the section of Interstate 72 between Griggsville and Hull is named in memoriam of Free Frank McWorter. The site has not yet achieved National Park status, but hopefully will soon after more surveying and excavating is done. In the meantime, New Philadelphia’s history can still be found all over Pike County in museums, libraries and at the site. There are several signs in the pavilion as well as an augmented reality walking tour so visitors can learn about daily life in the town. 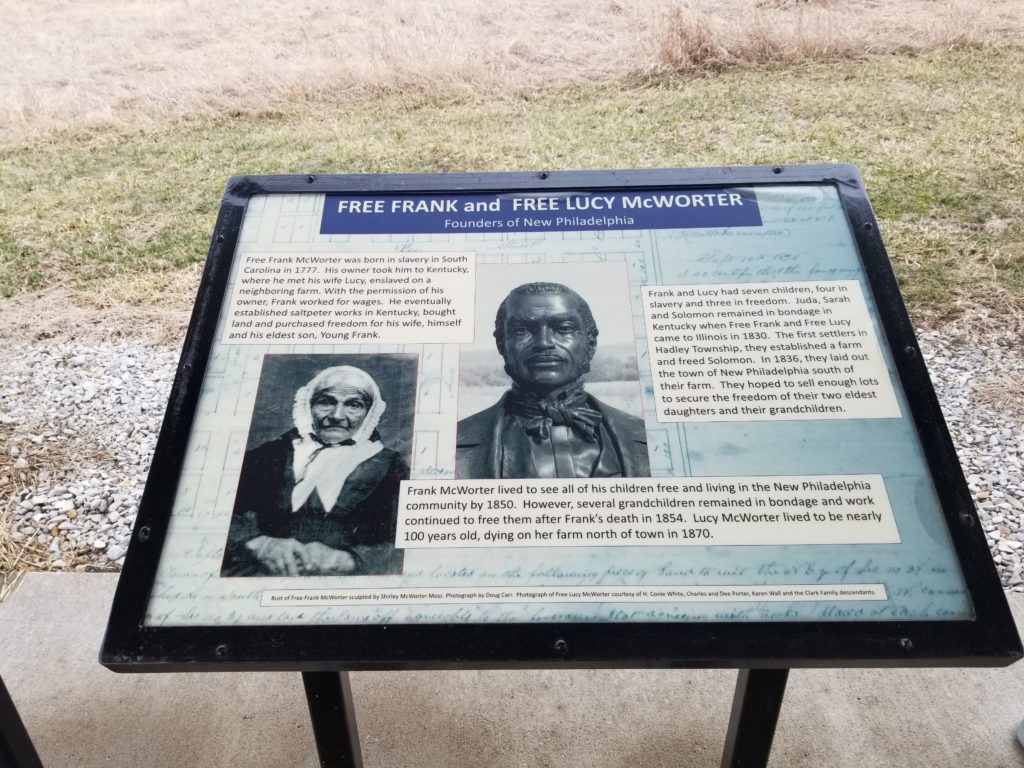 Frank McWorter is best known for his town, New Philadelphia. This was the first town in North America to be platted and legally registered by an African American, in 1836. Frank’s life before New Philadelphia, however, is lesser known. While most know that he was a slave who bought his freedom and started a town, few know the challenges he faced before he was free.

Frank McWorter was born a slave in South Carolina to an enslaved mother and her owner. He married and had children, so he had a large family to try to protect whenever possible. This was difficult to do because they were separated by the slave trade. When Frank found out his wife was pregnant again, he decided to start working and saving money to buy his wife from slavery so that child could be born free. He did this by mining and processing saltpeter for use in gunpowder. He lived in Kentucky, still in bondage, at this time.

Frank continued working and bought himself his freedom so he was entitled to the rights of a free man, including land ownership. He bought land in Kentucky, but soon moved away due to racial tension. With the help of a local doctor, Frank was able to move to Illinois and buy a piece of the Military Tract without having to pay the $1000 bond required for formerly enslaved settlers at the time to be able to move into Illinois. Later, Frank bought a neighboring section of Military Tract land and would begin selling the lots for money.

The lots he sold were what became the town of New Philadelphia. Lots were bought by immigrants of all backgrounds, including European and African. Frank eventually petitioned to take the name of his first owner, McWhorter. A last name would entitle him to even more rights and allow him to protect his land and family under that name. He succeeded and would take on the slightly altered name of McWorter. Frank saved up enough money to buy 16 family members their freedom and had a real last name to provide for them. Each time he bought a family member, he took a very dangerous risk. He would have to travel into a slave state with the money and his freedom papers and hope that he could make it to his family member and back to Illinois safely. He planned his routes very carefully and made each trip successfully.

The town of New Philadelphia became a sort of haven for immigrants and slaves and their families who did not fit well into white towns or cities. Residents even did business with white locals who lived or traded nearby. New Philadelphia thrived as a farming and trading town from its establishment in 1836 to its abandonment in the 1940s, though it did see many fluctuations in population throughout this time. Other trading and market centers were growing and a new road and railroad both bypassed the town. These things combined made New Philadelphia less desirable than the nearby towns that had direct connections with larger towns and cities. This is likely a major contender to New Philadelphia’s occasional falters in population.

Despite Frank’s death in 1854, the town continued to be a bustling village with a church, a school, and many stores and services. Even though the original town was mostly gone or buried by farmland by the 1940s, the memories of what Free Frank did for those families continue to live on. He and his wife are buried in the cemetery just outside of what would have been the town, and this cemetery is on the National Register of Historic Places. The New Philadelphia site is in the process of being researched heavily so accurate reconstruction can begin. It is currently striving for National Park status.

Free Frank McWorter’s goal was never to establish a historically significant village that would be preserved and praised forever. His goal was to free his family from slavery. His story was one of love and determination. He is a symbol of Illinois’s refusal to segregate and persistence to help those in need. Free Frank’s impact on Illinois was great for abolitionists, slaves and immigrants alike, and this impact remains today and lives through his family and everyone else who passionately shares his journey through writings, organizations and speeches today.